In 2004 Nenpan relocated to Pankshin, her country home. She immediately published her book titled The Struggles of a Nigerian Youth. It was her first published book. As the title suggests, the book tackles issues about the grim challenges of youths in the Nigerian society. The book also addresses some very contemporary issues in the Nigerian society. Soon Nenpan began receiving invitations to speak at various programmes. Her work as a youth motivator and activist took shape. Nenpan mobilized the Pankshin New-Lay-Out Youths and they produced a journal titled “Youth With a Focus”. The journal is a call to youths to shun vices, be focused, develop their potentials and influence their society positively.

As a voracious reader, Nenpan has been collecting a good number of books over the years. She soon launched her readers’ club with seven young people – Nen’s Library and Readers’ Club. 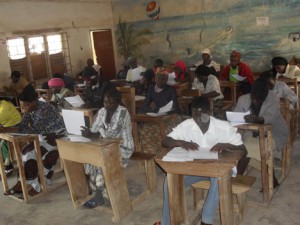 Disturbed about the social injustice, moral vices and the cult of mediocrity in her society, Nenpan mobilized youths and formed a youth club that was later to metamorphose in to a viable organization called CITY OF REFUGE – FRIENDS CLUB (CORefuge).  The organization runs a free school for the disadvantaged; a school and readers’ club for prisoners in Pankshin Prison of Plateau State Nigeria; a youth hostel for ex-convicts; a legal department that provides lawyers for abandoned awaiting trial inmates; a youth club with sports facilities; and a club for secondary school children called Movement for Excellence. CORefuge does inner city mission and other programmes.